1851: Traverse de Sioux – All land east of the Big Sioux, which included the areas of Brookings County, much of western Minnesota and eastern Iowa, was signed over to the United States government by the upper bands of the Dakota nation.

May 1857: The first two settlements in Brookings County, Flandreau (named for Judge Charles E. Flandreau) and Medary (named for Governor Samuel Medary of the Minnesota Territory) were established.

1861: Civil War began in the United States of America.

1862: The Dakota War started in Minnesota. Here is some information from History.com:

The Dakota Indians were more commonly referred to as the Sioux, a derogatory name derived from part of a French word meaning "little snake." They were composed of four bands, and lived on temporary reservations in southwestern Minnesota. For two decades, the Dakota were poorly treated by the Federal government, local traders, and settlers. They saw their hunting lands whittled down, and provisions promised by the government rarely arrived. Worse yet, a wave of white settlers surrounded them.

The summer of 1862 was particularly hard on the Dakota. Cutworms destroyed much of their corn crops, and many families faced starvation. Dakota leaders were frustrated by attempts to convince traders to extend credit to tribal members and alleviate the suffering. On August 17, four young Dakota warriors were returning from an unsuccessful hunt when they stopped to steal some eggs from a white settlement. The youths soon picked a quarrel with the hen's owner, and the encounter turned tragic when the Dakotas killed five members of the family. Sensing that they would be attacked, Dakota leaders determined that war was at hand and seized the initiative. Led by Taoyateduta (also known as Little Crow), the Dakota attacked local agencies and the settlement of New Ulm. Over 500 white settlers lost their lives along with about 150 Dakota warriors.

President Abraham Lincoln dispatched General John Pope, fresh from his defeat at the Second Battle of Bull Run, Virginia, to organize the Military Department of the Northwest. Some Dakota fled to North Dakota, but more than 2,000 were rounded up and over 300 warriors were sentenced to death. President Lincoln commuted most of their sentences, but on December 26, 1862, 38 Dakota men were executed at Mankato, Minnesota. It was the largest mass execution in American history.”

Due to fear of attack, Sioux Falls and Flandreau were abandoned until 1865.

1869: The new Medary settlement was established north of old site.

July 3, 1871: Brookings County was organized in the cabin of Martin Trygstad, son of original members of the village of second Medary settlement. The original boundaries extended two miles south of Flandreau.

1871: The first Post Office in Brookings County opened with Martin Trygstad as postmaster.

1874: The first school session in the county were held at Medary. School was held in people’s homes on a rotating schedule.

1874: Oakwood’s post office established in Byron Pay’s home with him as postmastser.

1877: A public school district is set up in Lake Hendricks.

1878: The village of Fountain was established about eight miles northeast of present-day Brookings.

1879: Volga, Elkton, and Aurora are established as stops along the railroad.

1879: The village of Brookings was platted and named Brookings in hopes of making it the County seat.

November 4, 1879: The city of Brookings is named County Seat because of its central location in the county.

1879: The population of Fountain packed up and moved mostly to Brookings and Aurora.

1881: Brookings was designated as the site for the agricultural college.

1883: Bruce was founded after the Dakota Central Railroad extended a branch to Watertown, and almost all of the buildings at Oakwood were moved either there or to Volga.

1884: Bushnell and White are formed after the Burlington, Cedar Rapids and North Western Railroad extended a line from Ellsworth, MN to Watertown.

“The county and the city of Brookings got their names from one of South Dakota’s greatest pioneer promoters, Wilmot W. Brookings. Brookings set out for Dakota Territory in June of 1857. He arrived at Sioux Falls on August 27, 1857, and became one of the first settlers there. He and his group represented the Western Town Company. After a time in Sioux Falls, Brookings and a companion set out for the Yankton area to locate a town in an area that was soon to be ceded by the Native Americans. This trip was begun in January of 1858, and the two soon encountered a blizzard that froze Brookings’ feet, which both had to be amputated.

Though such a plight would have scared many men from the unsettled Dakota Territory, Brookings was never to be scared away. He rose to a high position, once being a member of the squatter Territorial Legislature and later being elected squatter governor. Brookings was a highly respected man with huge amounts of courage, energy and ability. These traits led Brookings to be appointed superintendent of a road that was to be built from the Minnesota state line west to the Missouri River about 30 miles north of Ft. Pierre. It was during the construction of this road that Brookings came into contact with land that was part of this county at the time. Because of his drive to settle the Dakota Territory, Brookings County and city were named for a spirited pioneer promoter. Wilmot W. Brookings made settlement of this area a real possibility for many people.” 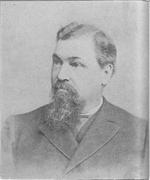